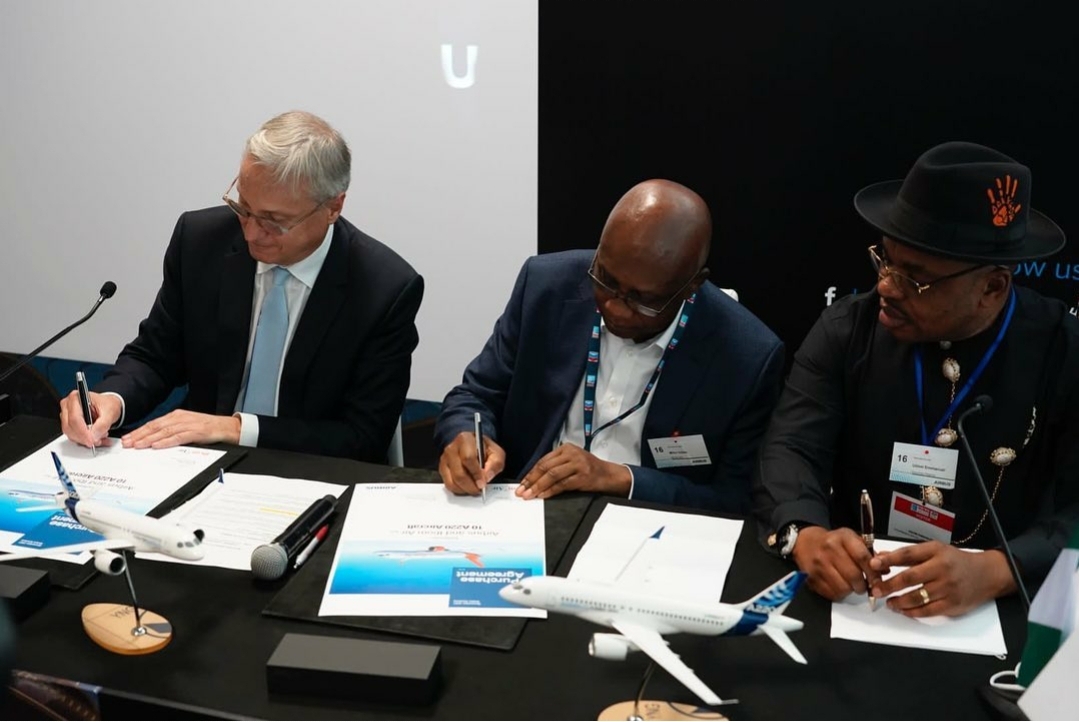 Ibom Air, the indigenous Airline of the Akwa Ibom State Government of Nigeria, has placed an order for ten (10) A220 aircraft with Airbus, at the ongoing Dubai Air show, taking place at the purpose built DWC event arena in Dubai. 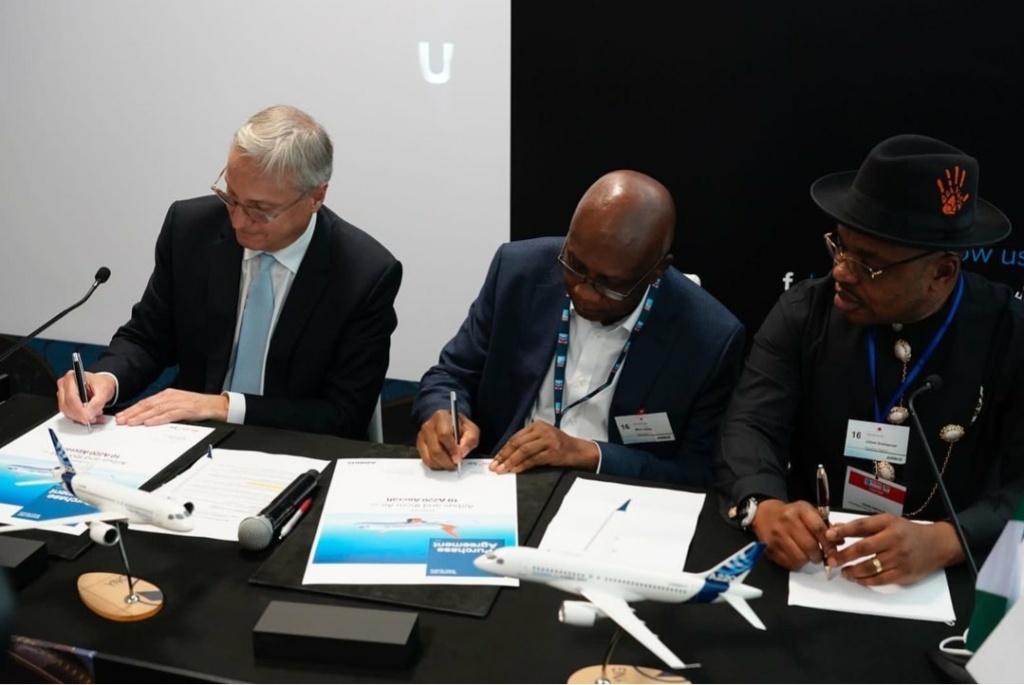 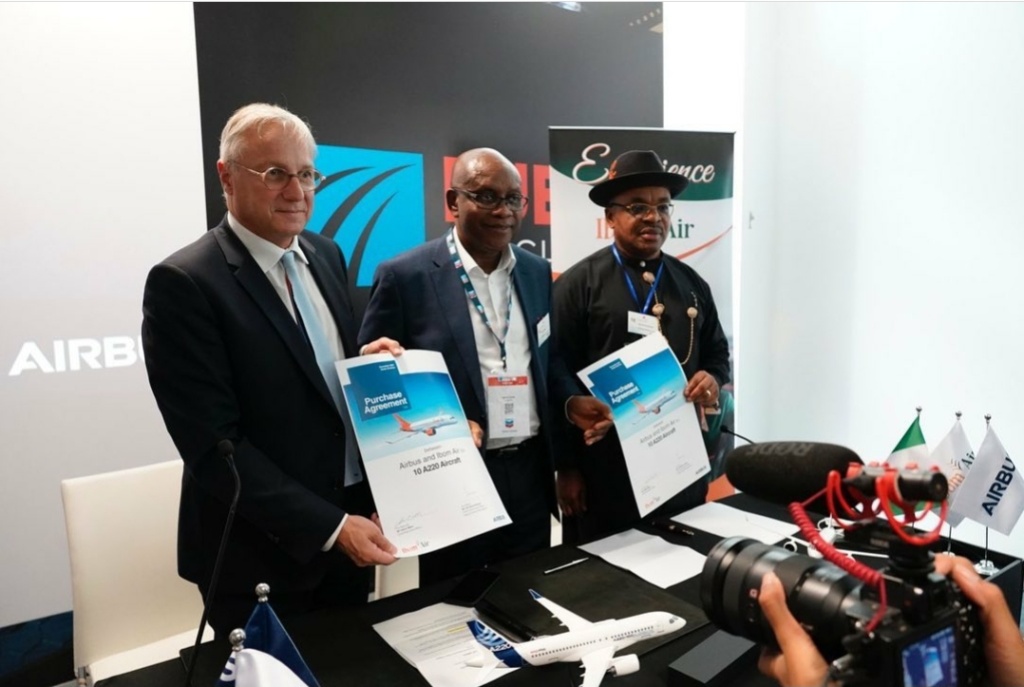 The agreement signed by the Chief Executive Officer of Ibom Air, Mr Mfon Udom and Chief Commercial Officer of Airbus, Mr Christian Scherer, was done in the presence of His Excellency, the Governor of Akwa Ibom State Mr Udom Gabriel Emmanuel. 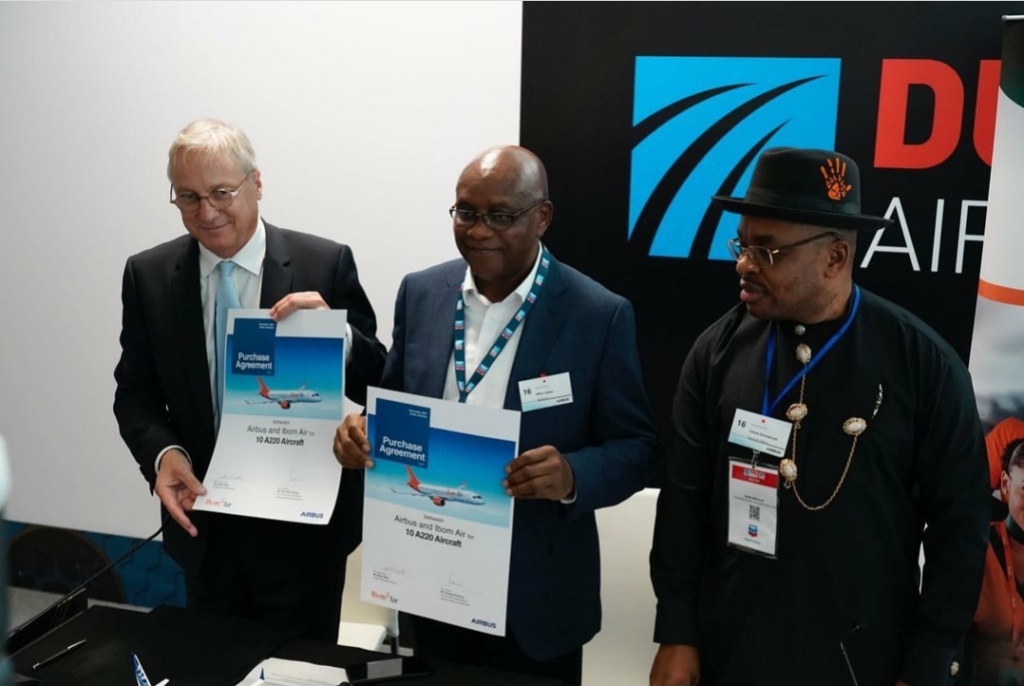 Working in collaboration with the Airbus team, Ibom Air took an innovative approach to making the choice of the A220. The airline started by wet-leasing two (2) A220s for a year, to test the suitability of the aircraft for their needs. Within 6 months of this process, the airline was able to validate the A220 as the right choice for its domestic and regional aspirations. The order of the ten (10) Airbus A220 is in line with the airline’s aggressive growth plan, which will see it expanding its footprint into new domestic routes as well as regional routes covering West and Central Africa in the immediate future. The first phase of this expansion is set to cover cities like Malabo, Douala, Libreville, Kinshasa, Accra, Abidjan, Freetown, Banjul and Dakar. Ultimately the airline intends to operate throughout the continent of Africa.

The all-new A220 is purpose built for efficiency, targeting the 100-150 seat market. It burns 20% lower fuel per seat compared to previous generation aircraft and flies to a range of up to 3,400 nm (6,297 km), offering performance similar to larger, single-aisle aircraft. The A220s combination of a superior cabin product and low operating costs are a perfect fit for the airline’s network growth strategy and will help Ibom Air offer its customers an unrivaled value proposition.

His Excellency, the Governor of Akwa Ibom State in his remarks stated “earlier in the year, we gathered to welcome the first Airbus into our fleet, and I must say that we are proud to be the first airline to order the all-new Airbus A220 in Nigeria. The A220 will allow us to increase the number of passengers into Akwa Ibom, thus bringing more first-time visitors and business travelers to the State. These efforts reflect our commitment to enabling local commerce and industry, in line with the State’s economic growth strategy. With this latest acquisition, Ibom Air is better positioned to contribute to drive long term economic growth for Akwa Ibom State.”

Also speaking at the announcement, the CEO of Ibom Air threw more light on the choice of the A220: “It gives me great pleasure to be here at the announcement of Ibom Air’s order for 10 Airbus A220s. We are pleased with the steep growth we have achieved in the two (2) years and five (5) months since we commenced operations, a growth mainly driven by the massive embrace of our product and brand by the Nigerian domestic flying public. As we contemplated the next phase of our expansion strategy, we gave consideration and opted to procure two (2) A220s on a one-year wet lease, in order to try out the aircraft to ensure it was fit for the purposes of our business. I am pleased to say here that the approach has been a huge success for us. We found out that not only can we fill up the aircraft, but it has also become a favorite in the Nigerian domestic market. Our passengers love it. And so, here we are today, ordering 10 A220s, having tested and validated it as the one stop solution for our domestic and regional aspirations.”

On his part, the Chief Commercial Officer of Airbus, Mr Christian Scherer said “we are thrilled to add Ibom Air as a new Airbus customer. The A220 is ideally suited to Nigeria’s aviation needs, providing operational flexibility, growing the business, and responding to demand for increased passenger services. Through this investment, Ibom Air is underscoring its ambition for regional and in due course, international connectivity, efficiency and versatility.”

With the purchase agreement signed, deliveries of the aircraft to Ibom Air will commence in the first quarter of 2023.